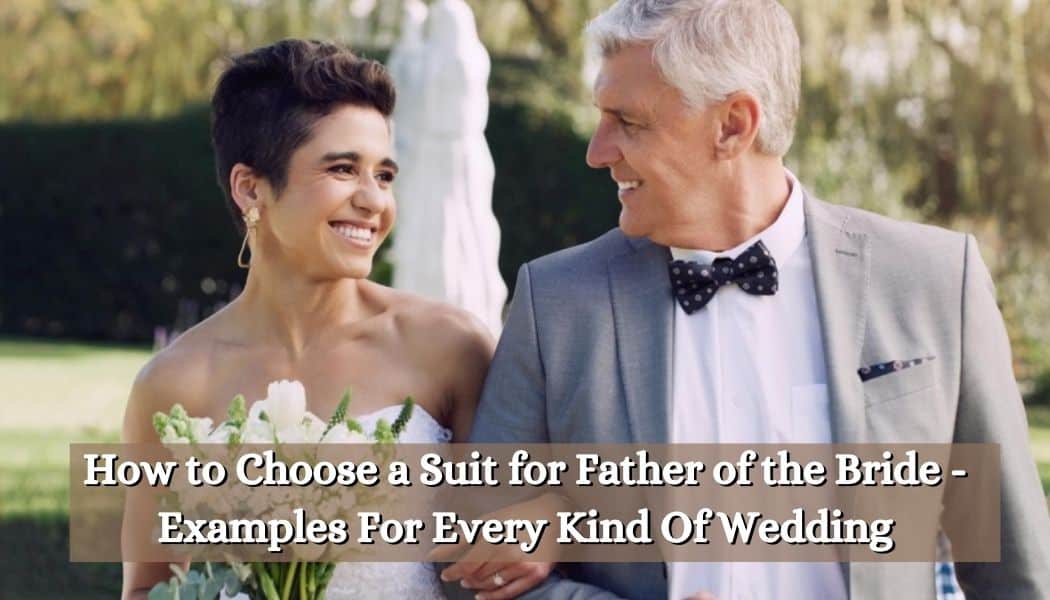 Whether walking down the aisle or the classical dance together, the bride’s father gets a good spotlight. And what suit he’ll wear will tell a lot about the wedding.

Every daughter wants her dad to look the best. But what the bride’s father will wear is often challenging to figure out. This guide will precisely answer this through some considerations, followed by outfit inspirations.

Things Father of the Bride Needs to Consider

The father of the bride is a significant person at a wedding. And the attire should complement it. So we are talking about looking distinguished without being underdressed or overboard.

It’s, therefore, essential (and logical) for the father to consider things like the colour and the season. Then, he may incorporate a personal style with strict attention to detail. But first:

The Wedding Attire Has to Match its Formality

Most dads have an innate sense of dressing modestly, even at weddings. Perhaps it’s age or the emotional attachment to the daughter, but many bride’s fathers often go underdressed.

We also see the bride’s father wearing a suit they already have. Although nothing is wrong with it, it’s often not formal to the occasion.

Therefore, whatever the bride’s father wears must match the wedding dress code. First, determine what the Groom will wear to make it easier. If it’s a casual wedding, a simple suit will be enough.

Wearing tuxedos is appropriate for a dressed-up theme, such as a black tie dress code. So, the plan here is to have an outfit that’s an accolade for the event.

But Don’t Outdress the Groom

The Groom should be the centrepiece of a wedding party. Even the unconscious attempt to outdress him will look awful. So, as a father of the bride, you must keep the bridegroom center of attention (along with the bride) while matching the dress code.

For example, if the bridegroom wears a navy suit for a modern wedding, the bride’s father can complement this with something similar, like a royal blue suit.

The father of the bride should also distinguish him from the groomsmen. This could be done with a bit of detail via any accessory.

Matching the Suit Colors is Crucial

It’s good to have a similar array of colours in the outfits. After all, it looks harmonious when captured in photos. In addition, it emphasizes the concept of matching the formal affair and complementing the bridegroom’s dress.

Hence, a subtle matching of the suit colours among the bridegroom, groomsmen, and bride’s father is always essential. Even in weddings with an open dress code, focus on wearing classics and avoid being a distraction.

The season and time of the wedding can affect the dress code. Therefore, these should be the considerations for the father of the bride’s attire.

Cooler seasons and nighttime events often have a dressed-up theme. So, dark tuxedos and suits are best. On the contrary, summer and daytime events tend to be less dressed; semi-formal, let’s say. Here, a mere suit will do the job.

The season is also crucial in the choice of fabrics and patterns. As in summer, everyone, including the bridegroom, will be wearing cotton or linen, and so can the bride’s father.

If the dress code mentions a black tie, everyone important to the wedding will wear tuxedos. So it’s the time when the bride’s father can match the wedding party and wear a classic black tuxedo.

Here, the dad shouldn’t worry about outdressing the bridegroom, as everyone will be dressed formally. However, the details will distinguish the father from the wedding party. The tuxedo lapel, for example.

When choosing a tuxedo for the father, don’t let his age shadow the style. Instead, choose a slim-fit tuxedo or one which complements his body type.

Match these with classic black oxfords. We don’t recommend opera pumps as they are too much for the father of the bride.

Similarly, a black tuxedo is often appropriate for the bride’s father in a formal wedding outfit with a black-tie creative dress code.

But you must consider the bridegroom’s dress first. So if it’s a tuxedo in some fashion-forward colour like burgundy, replace the dad tux with a black suit.

Black or Navy Suit for a Standard Nighttime Wedding

If it’s not the tuxedo, the bride’s father can wear a dark suit and still look remarkable. The black and navy blue will then be the two most suitable options. Let’s talk about the black suit first.

In most nighttime weddings, the black three-piece suit is the quote-unquote standard for the bridegroom. Wearing a black two-piece as the bride’s father will match the formality. Also, you won’t go overboard.

But as the bride’s dad, you should mark a character of distinction here. We suggest it by a strong accessory game. The tie, pocket square, and boutonniere are the three main armours.

The other option is the navy suit. It’s somewhat similarly formal as a black suit but a little jollier. We love the navy suit because it will cherish your love for your daughter as the bride’s father. Plus, the suit will mutely express your emotions; the only thing dads are bad at doing.

But here we recommend some variation from the typical business navy suit. The fabric, for example. Don’t go with versatile suit fabric here; instead, choose something in plain wool. Add trouser pleats and peak lapels too.

Many fathers of brides enjoy wearing patterns to showcase their style. So, pinstripe in black and blue will be great, only if it doesn’t violate the dress code.

Bright Color Suits for a Casual or Modern Wedding

There is little to worry about whether the wedding is casual or modern. The guests will be wearing shades of blue, grey, and brown. But, the father of the bride’s outfit should not be along the simple lines.

The best choice here is a royal blue suit. Blue tones here work similarly to the navy suit, and the bright hues save you from being overdressed. Again, the accessories can shift the formality depending on the groom’s outfit.

A grey suit is another appropriate choice for a casual wedding party. However, choosing between medium or light grey can be the father of the bride’s preference.

A vest with these less-formal suits will also be a no-brainer. The choice of which, again, can be a matter of preference.

Modern daytime weddings would require even less effort. Everyone will wear lighter colours, and then the father of the bride can, then, wear a casual tan suit. And if you feel tan is a little fashion-forward, you can replace it with a genuine brown case.

How to Accessorize the Look

As the father of the bride, accessories can hone your dress. The boutonniere, for example, will exclaim your importance in the wedding.

A pocket square is another must-have. Although it relates to the personality, yet a great way to play with the formality. Even with a tuxedo, you can try everything from the straight to the four-peak fold.

A tie is another great accessory that can give the bride’s father distinctive styling. For example, switching a true black with a black polka dot tie is a small yet keen change. Similarly, you can try different shirt and tie combinations for a casual wedding.

Some other accessories include shoes, belts, suspenders, rings, lapel pins, and watches. These are good for individual style and have little to no role in father-of-bride attire.

Want To Plan Your Wedding? Here Comes The Guide

Everything You Need to Know to Plan the Perfect Wedding