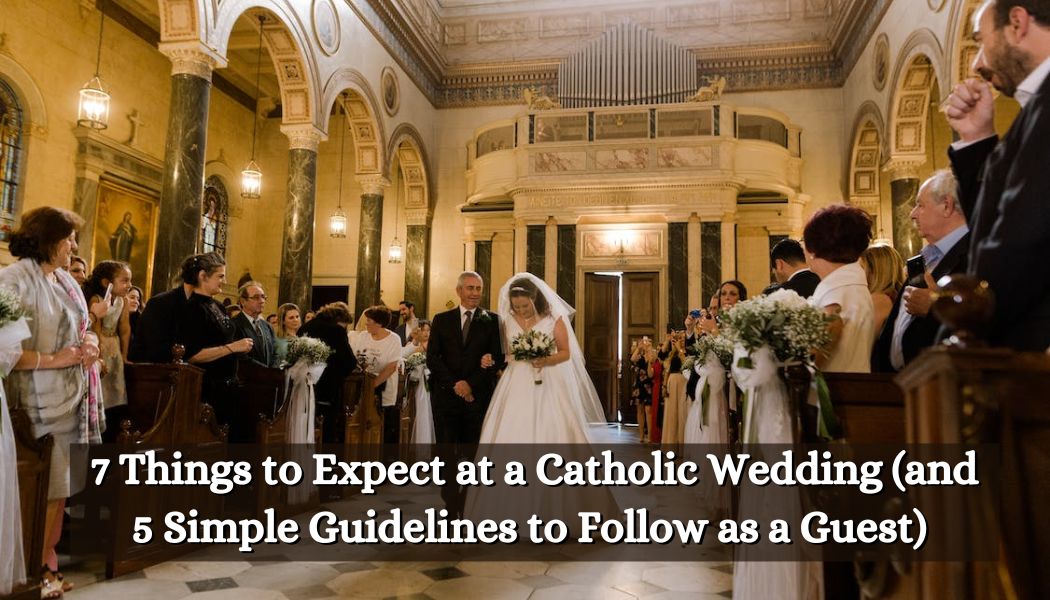 Catholic weddings are one of the most important days in any Catholic’s life. And just like any other type of wedding, they can be a little overwhelming to the hosts, the planners, and the church, considering all the planning and preparation involved to see the ceremony through to success.

You might not be so green if you’ve attended one or two such events before, but the truth is, it can be downright confusing when you get invited to a catholic wedding for the first time.

You may not be used to the catholic customs, prayers, songs, and order of doing things, let alone having a clue about how the wedding is conducted or the order of proceedings. And, primarily, since these weddings are held in the church, it is essential to know what to expect and how to conduct yourself as a guest.

Thankfully, things can get a tad bit easier for you during the event if you arm yourself with a few simple tips and guidelines.

In this piece, we shall cover seven things to expect in a Catholic wedding, alongside five simple guidelines to follow as a guest – and how they can help simplify your experience.

A Catholic wedding is a beautiful and sacred event, which is precisely why the main ceremony is held inside the Catholic Church. And as you might have guessed, the wedding processional is one of the biggest moments of the entire ceremony, which marks the couple’s entrance into the venue.

During the processional, the officiant will walk down the aisle first, followed by the groom and his best man behind. They then take their positions at the altar, with the priest at the center.

The bridesmaids and groomsmen will enter the church together and walk down the aisle in pairs, with the women and men on the left and right, respectively.

The maid of honour may follow behind, sometimes holding the bridal bouquet, after which the father of the bride (or godfather) escorts her towards the altar. As she makes her way down the aisle, the officiant may request the guests to stand up, so they won’t be caught sleeping.

After the processional, the newlyweds will walk back down the aisle together, followed by their parents and guests. It’s customary for guests to stand and applaud as the wedding couple makes its way down the aisle.

Gift-giving is inarguably among the most conspicuous activities in any wedding, let alone a catholic wedding.

Of course, there’s a wide range of gift items that you can get for the couple, from household items to keepsakes and even money. If you’re looking for something unique, helpful, and more thoughtful, why not consider getting the bride or groom a gift honouring their faith?

As you may discover from a quick look at the House of Joppa website, there’s a vast range of such items that you can even order online. These could be anything from rosaries and crucifixes to holy water fonts, catholic wall art, and jewelry pieces with a catholic theme. Such options will come in handy if you want to avoid getting a gift similar to everyone else’s.

Blessing of the Couple

As the official start to the marriage, the Blessing of the Couple is a very special moment for both the couple and the guests during a Catholic wedding. This is when the priest or deacon blesses the bride and groom with holy water and says a prayer for their union.

After the exchange of vows and before the Exchange of Rings, the priest or deacon will ask the couple to join hands. He will then say a prayer asking God to bless their marriage, using holy water to make the Sign of the Cross on both of their foreheads.

The Nuptial Mass is the central part of a Catholic wedding ceremony, in which the couple exchanges marriage vows before God and their witnesses – the congregation.

Here are a few things to expect during the Nuptial Mass:

Communion and the Eucharist

The Catholic Church considers the Eucharist, or Communion, to be the most important of all the sacraments. The Eucharist is a sacred meal in which Catholics believe that Jesus Christ is truly present–body, blood, soul, and divinity – under the appearance of bread and wine. Because of this, it is considered a holy event to receive Communion in some catholic weddings.

Guests should know a few things before attending a Catholic wedding where Communion will be offered.

A recessional is basically the processional reverse: instead of walking down the aisle, the wedding party walks back up. The bride and groom usually lead the way, followed by the maid of honour and best man. Then come to the bridesmaids and groomsmen, followed by the couple’s parents. Finally, everyone else exits the ceremony space at the instruction of the officiate.

After the church ceremony, the couple may decide to have a wedding reception in a separate venue. This could be public grounds, a resort, or a hall capable of accommodating more guests than could fit in the church or guests from different religions.

This is usually where the nitty gritty activities of the day take place, such as cutting the cake, dinner, the first dance, fireworks, gift-giving takes place, and passing congratulations. It’s also where the bouquet & garter toss happens, so you might want to stick around for more fun after the church mass.

Simple Guidelines to Follow as a Guest at a Catholic Wedding

As a guest at a Catholic wedding, you should follow a few simple guidelines to avoid any potential problems or awkwardness.

Most catholic weddings do not have a strict dress code. A suit or a simple shirt and tie could do for a guy. For the ladies, you can pick something intelligent and casual from your wardrobe, say skirts and blouses, a fancy dress, or even some suit pants.

It’s good to remember that this is a religious ceremony and an event that demands respect and sanctity. This means no talking during the mass, no phones or cameras out, and respect for any holy objects or symbols.

Some people hold weddings on a budget or prefer hosting just a small crowd, so it’s proper etiquette to attend catholic weddings that you’re actually invited to.

Know Where to Sit

If you are not Catholic, it is also essential to be aware of the fact that you will likely be sitting in the back of the church. This is not meant to be disrespectful, but simply because guests who are not part of the faith are not able to take communion.

Moreover, some weddings may have reserved sitting spaces for family members, guests of honour, and so forth, so it’s good to know your place to avoid embarrassment. And on the same note, it pays to familiarize yourself with the common catholic prayers beforehand, so you’re in sync during the mass if you’re not a devoted catholic.

Another thing to remember is that Catholic weddings are lengthy, often lasting over an hour. So make sure you’re prepared for that before heading in. You’ll probably have to free your entire day if you intend to stay up until the after-party.

Catholic weddings are beautiful fun. Primarily since they represent the matrimonial union in the presence of God, they’re considered unique. If it’s your first time attending one, the above guidelines can help make the ceremony as enjoyable to you as the most devoted catholic in the congregation.