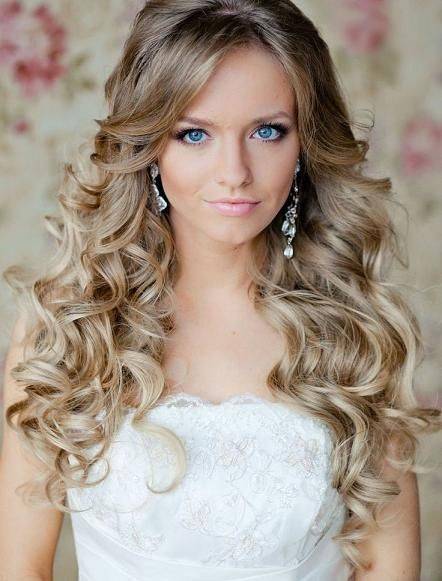 I am due to get married to my long term partner at the end of November and because I only ever plan to get married the once, I want absolutely everything to be perfect. Like most brides however, my biggest concern is regarding how I will look during the ceremony and as such, I have spent the last few months experimenting with different styles of makeup and hair. I am still undecided regarding which colour of eye shadow and lip gloss I will don for the event but I have decided that I will be wearing my hair in ringlets.

But why I have I chosen to have curly hair for my wedding? Here are just three reasons I want to wear a curly do on my big day:

I studied a module of Greek mythology during my time at university and I have to say that I have become pretty obsessed with Greek Goddesses since then. Many of these fabricated – yet powerful and classically beautiful – women had long curly hair, including Aphrodite (the goddess of love and beauty) and Hera who is fittingly, the goddess of marriage, women and childbirth. Curly hair was considered the most beautiful hair style in Ancient Greece and there are worse things to look like on your wedding day than a goddess!

Numerous studies have also been conducted with men over the years to determine the “flirtiest” of hair styles and unsurprisingly, curly hair came up on top. Maybe that has something to do with the temptation to twirl such around your fingers? A recent news story even announced that some academic research has discovered that those women who don curly hairstyles in the work place are also taken less seriously by their male peers due to the supposedly flirty aesthetic.

It might make me sound like I am not pure enough to wear a white dress but I like the idea of looking a little flirty and attractive to other male onlookers at my wedding – why wouldn’t I want people to be jealous of the groom?

Although many traditional wedding “up dos” look pleasant enough, they are usually pinned to the head quite tightly and this can cause the scalp to pinch. Some women might be happy to live by the sentiment that “pain is beauty” but I don’t want to be uncomfortable throughout that day that is supposed to be the happiest of my life!

Arguably, I could wear my hair up for the ceremony and undo it for the reception but after affixing an up style using several styling products, the hair is not easily reworked into another style due to the build up of product – I definitely will not have time to wash and restyle my hair between the two sections of the event.

Wedding up dos are also usually also built up around the position of the veil. I really don’t want to have to wear mine all day and because mine if the kind that has a hair grip built into either side of the band, it will be far more easily removed from locks that are loose than those which are tightly bound with bands and hairspray.

Curling your hair for a wedding is easier than you might think!

My hair is naturally poker straight and as such, there would usually be a little pain involved in transforming my locks into beautiful curls due to overnight techniques such as ragging, pin curling and hair rollers. Thankfully, I discovered a product that makes sleepless nights whilst curling a thing of the past; Curlformers.

I don’t want to bore you with the details regarding the application of these wondrous curling tubes (details of this can be found on the official website) but here are the reasons I love the product so much;

If my marriage lasts as well as the curls one can achieve with Curlformers then I’ll be in marital bliss forever!

Jacqueline Green is convinced that there is no better way to achieve curly hairstyles than with Curlformers kits – she really has never used a better hair curler!

1 thought on “Why Loose Curly Hair is Perfect for Weddings”