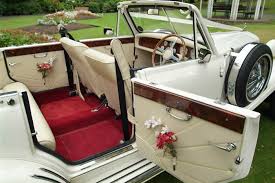 The glitz, the glamour and the glitter of a celebrity wedding is fascinating to us mere mortals. While the rest of us are happy being swept to our own wedding in a classic Used BMW, Hollywood does things a little differently.

If you’re one of the Kardashian sisters, one car is never really going to be enough is it? Kim Kardashian’s wedding saw her travelling in style with a fleet of cars including Rolls Royces, Maybachs and more! Every guest arrived in ice-white luxury. Miss Kardashian has always taken her method of transport seriously as she drives a Rolls Royce Ghost around Hollywood just to run errands, so it’s no surprise she went all-out with the transport for her wedding.

Also a fan of the Rolls Royce, Britain’s newest royal, the former Miss Kate Middleton, opted for a 1977 Rolls Royce Phantom VI to get her to the church on time. Unperturbed by the fact that a few months previously, her father-in-law Prince Charles and Camilla Parker-Bowles had been pelted by eggs and bottles by protesters in the very same car, she chose the Rolls over the classic Glass Coach favored 30 years earlier by Lady Diana Spencer. Maybe she wanted to avoid some of the spectacle a carriage would have provided. Leaving the Abbey was a different matter. Kate and Wills wowed the crowds following the ceremony in an open topped 1902 State Landau horse-drawn carriage on their trip back to Buckingham Palace.

For a touch of old Hollywood glamour, you can’t do much better than Grace Kelly. In her wedding in 1952, she traveled to the church in a Mark Vl Rolls Royce / Bentley Park Ward convertible finished in British Racing Green for a look that was as understated as it was glamorous. One of only 6 ever built, the car is still available to hire for those who can afford it and want to emulate one of the most beautiful women to ever live.

Going the traditional route with a vintage white Rolls Royce for her 2011 wedding, the usually oh-so-edgy supermodel Kate Moss made her wedding to Jamie Hince totally timeless. A classic car gives any wedding a touch of glamour and will certainly prevent wedding photos from looking dated when Kate looks back on them in a few years.

Not technically a celebrity wedding, more the wedding of a celebrity sibling, Keira Knightley was a bridesmaid at her brother’s wedding in 2010 and got just as much attention as the bride in her prom-style plum-colored bridesmaid’s dress. Giving the wedding a kooky edge, the bride arrived in a classic London cab. However, for the purposes of wedding transport, the cab was white. This unusual method of wedding transport helped designer Kerry Nixon (in her retro wedding dress) really stand out from the crowd.

If you fancy a bit of celebrity style at your wedding, you may not be able to hire a fleet like Miss Kardashian, but you can hopefully hire one beautiful car to make your wedding special.