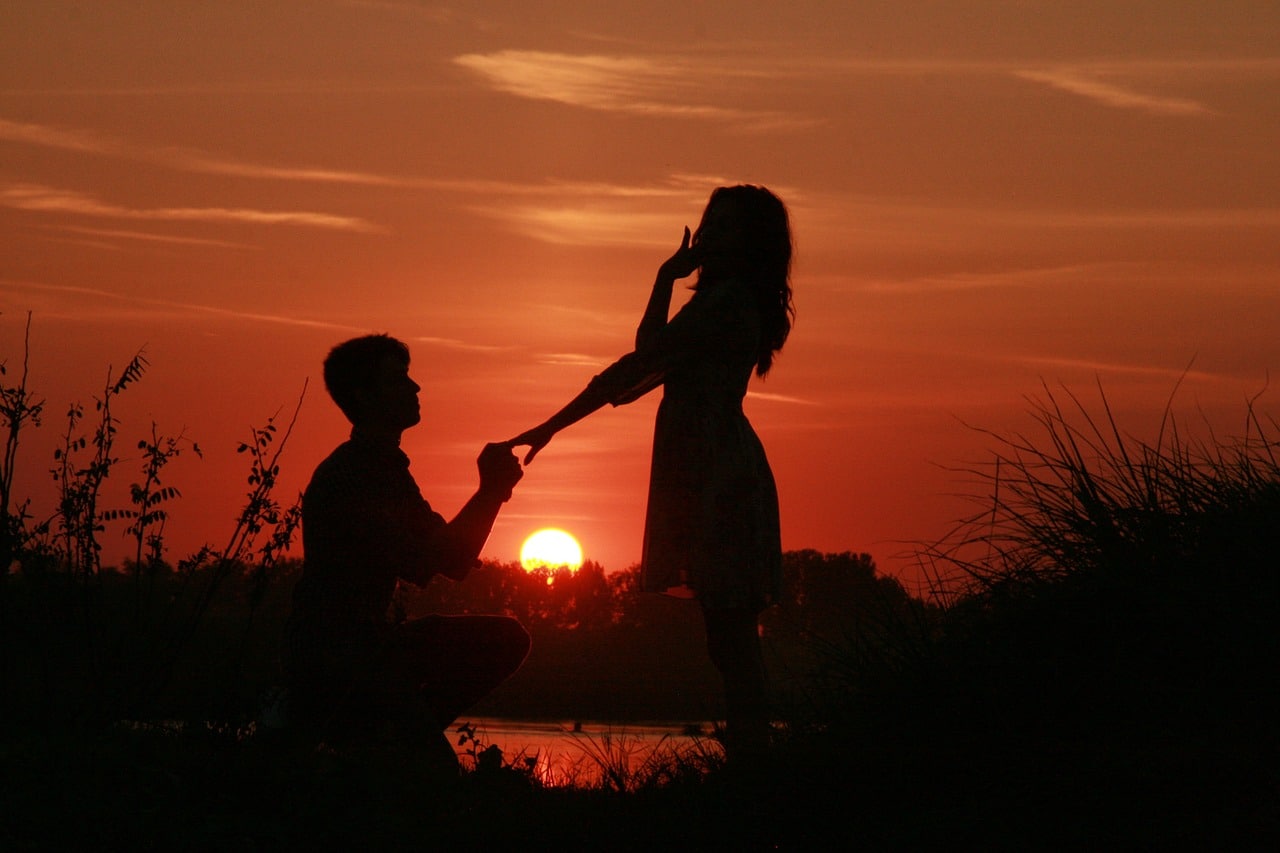 Have you ever checked out our wedding proposal contest on Best for Bride? If you haven’t already, you should! It is full of exciting stories of wedding proposals done right, and we are certain that you will enjoy reading the innovative and romantic ways in which the singular life-changing question, “Will you marry me?” was presented and accepted by different couples.

As I was going through these stories of love, I thought it’s a good idea to look at what marriage proposals are like today and explore it a little deeper. So, join me as I dig into this subject and let’s have some fun. We also have three of our popular story favourites at the end of this post, so don’t forget to check them out as well.

Some history on the existence of marriage proposals

Accepting a proposal is not compulsory. Many couples choose to wait and see if they are indeed agreeable to spending a lifetime together before they agree to get engaged. Nevertheless, a surprise proposal executed beautifully and thoughtfully is a thrill for every prospective bride and one that most women dream of.

This article on Wikipedia tells us how 29 February is the one day that women could propose to their partner, in countries like Scotland and Finland. Although proposals by women are more popular today, it is still considered the prerogative of a man to take this important step.

The symbolic gesture that has forever been associated with marriage proposals, most men (a whopping 76%) still favour the practice of proposing to their lady love on a bent knee. Although there is no definite history behind this practice, this article on the Love to know blog sheds some insight.  It suggests that the gesture exalts the woman, as the man shows his respect to her by lowering himself. It is also comparable to the kneeling of knights when conferred an honour, and accepting a proposal of marriage is a similar honour. The practical reason suggested is that this pose of the man places the ring in an elevated position between the couple, This prevents the blocking of the light falling on the ring, and makes it more attractive. Isn’t that interesting? So, which of these reasons do you buy?

Now, let us look at some interesting trends, numbers and facts concerning marriage proposals. Hopefully, this will give guys (or girls) a better idea of what would work, if they intend to pop their question sometime soon.

We’ve seen plenty of romantic wedding proposals in sitcoms and movies, so which of these do you think would be the best for your woman? Is it the romantic and intimate style with just the couple there that the two of you would love? Remember the proposal scene in Pride and Prejudice? How romantic was it when Darcy proposed to Elizabeth on the moor at dawn? Is your girlfriend a fan of such scenes, or would she rather prefer the epic Flash Mob proposal on Cougar town, where Jules cannot deny the proposal because of how touching it was? (Despite her already being married, that is!)

Well, it so happens that 50% of women on the Robin Bros annual survey prefer that her partner spend the majority of the funds on the ring, and keep the proposal simple. Despite this, a third of them wouldn’t mind having their engagement broadcast to the rest of the world, instead of keeping it just to themselves. After all, this is the age when reality shows rule us.

Traditionally, the man proposed, except in specific cases and on specific days as we saw earlier. Now, things have changed a lot. 37% of brides believe that it is fine to take on the responsibility of the proposal, rather than wait around for their partner to realize when it is time. This explains the new trend of engagement rings for men. In fact, the tradition of proposing on bent knee extends to this scenario too, but with the woman on her knee instead. Many men don’t really mind this type of proposal though, nor do they have any qualms about accepting it.

#When is the ideal time to propose?

Interestingly, women were more of the opinion that they had to wait for a while to make sure they were compatible as a couple, before deciding to get married. A fifth of the women on the Marriage proposal survey by Chillysauce mention that they would like to be proposed to on the anniversary of the day they got together. Men, on the other hand, had no such personal dates as their preference and chose Christmas Eve and Valentine’s day as the more likely dates to pop the question.

#Is it alright to propose on social media?

It is surprising how proposals, which were once considered very personal, are now finding more likes when executed in the public eye. A surprising 40% of women in the UK, on the Chillysauce survey, wouldn’t mind being proposed to over social media. Celebrities like Kelly Rowland and Kristen Bell have leaped to propose via the digital world, and more couples are following suit. However, the survey by Robin Bros in the US suggested something different. Almost the entire population they surveyed deemed techie proposals as inappropriate and unromantic, even when followed by an in-person gesture. So, I think it differs from place to place, and person to person. So, give some thought to it before you make your move.

Now, let us move on from these numbers and get around to a more serious topic. If you are planning to get engaged in the near future, these definite proposal mistakes might be helpful.

#Popping the question too early

Some women want to get married right away, and then some just aren’t sure. As the survey said, most women like to wait it out and see if the relationship is headed anywhere, before they commit themselves entirely. While guys may be certain that they’ve finally met the woman of their dreams, girls are usually more skeptical. So, our suggestion is to wait till you are past the infatuation stage, you have had your first few arguments and are still certain that this relationship will work. This will save you the trouble of being in an awkward situation if she seems undecided or says no.

Marriage proposals and engagement rings are a match made in heaven. One isn’t complete without the other! Proposing without the ring is a big, BIG mistake. So, what do you do if you aren’t sure that she’ll like the ring you pick? This article on the Knot suggests that you choose one from a store with an exchange policy.  Doesn’t that sound good? Or, if you have been engaged for long and both know that a wedding is on the cards, you can take her ring shopping. Our proposal story contest winners in Season 1, Darren and Angela did this.  They were together for 6 years before they were engaged to be married. Darren knew her style by taking her out to look at rings in advance, and everything ended out fine in the end. Or, you could always consider proposing to your lady love in a ring store, as Patrick Dempsey did in the movie, Sweet Home Alabama.

#Not personalizing the proposal to suit her personality

Not all women may revel in the idea of being proposed to in front of hundreds of onlookers. Many would prefer being in a park or a meaningful place with just the two of you or a few onlookers you know and would like to have there at the time. Make the moment about her, and your proposal will be more impressive. Many women love being proposed to at the place where you first met. So, if your lady is a real romantic, you may like to consider this option. Also remember that your partner may prefer it if you had it well-planned, instead of just going with the flow and not taking it seriously enough. It is a lifetime commitment, after all, so give it the due importance it deserves.

You may have painstakingly created the perfect plan for your proposal, but beware of sharing it with too many people. Sure, you can enlist the help of your trusted friends or family, if you want help with executing it. You may even give a hint to her parents when you ask them for their blessings, but don’t share the details. Make sure that it is a secret, and not something that is public knowledge. You do not want your girlfriend hearing about it from someone, and the surprise is spoiled. She may also appreciate it better if she could break the news to everyone afterwards, than learn that they all knew it beforehand and it was a surprise only for her. Wait for the right moment, and give her the joy she deserves when you propose to her. You could even have a meaningful engagement with just the two of you, and then break the news to the rest of your gang with an engagement party.

It’s now time for us to look at some of our favourite proposals from our engagement proposal contest archives. This is one of the most romantic proposals we’ve ever come across. Jason caught Kristen off-guard with his proposal, by leading her to the scenario by playing the board game “Catch Phrase.” When it was Kristen’s turn to guess, Jason’s clues began with “It’s something you do, when you love someone.” Kristen’s first comical guess was to buy them stuff. Her brother who was also playing finally guessed ‘Proposal’, and all of a sudden Jason was on his knee, asking Kristen to marry him. How unique was that? Read all about this wonderful couple who were the season 2 winners of our story contest here.

2. Sean and Paige’s touching cancer to the engagement story

Season 4 proposal story winner Paige was diagnosed with stage 3 lymphoma cancer and was in the hospital recovering from surgery. On the second night of her stay, Sean had all her visitors leave early, and walked in with a bouquet of roses. After showing her that he’d shaved his head so she wouldn’t be alone when she lost hers during therapy, he went on to propose to her. It was a touching moment, as Paige was too overwhelmed and ended up with her vital signs running berserk. Nevertheless, it was a wonderful proposal. This couple, on their fourth anniversary, visited their favourite restaurant in Woodridge. Rosie went on to order her favourite pizza and was upset that it took them more than an hour to get it ready. Just as she was above to give the staff a piece of her mind for the undue delay, her fiance took over and went to meet the staff. Surprise, surprise, he returned with a heart-shaped pizza that had “Will you marry me” written on it. How unexpected, exciting and thoughtful! And here’s the pizza that did the honours. Isn’t it refreshing to read these stories and appreciate the beautiful thought that went into each of them? Our proposal story contest pages are full of hundreds of exciting stories, just like these. Why don’t you visit them here and pick out a few to read when you have some time to spare? Perhaps, even add your own story and enter the contest that is on?

A Beginner’s Guide to Writing a Wedding Ceremony Script

The Art of Inviting: The Beginners Guide to Writing Wedding Invites

How To Be a Bridesmaid in a Wedding Party: The General Expectations of a Key Member of the Bridal Party