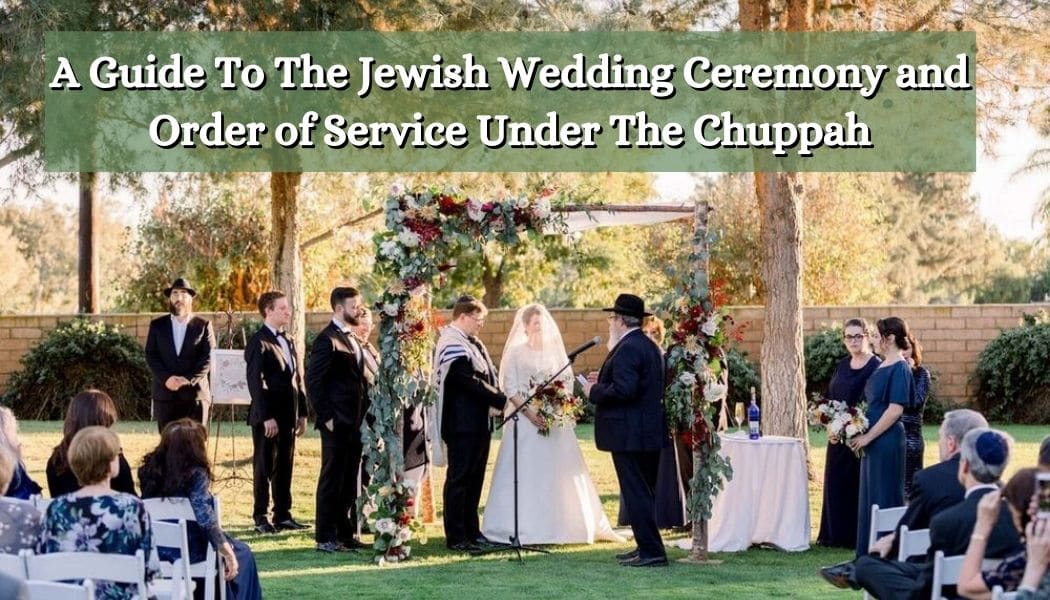 The Jewish wedding ceremony is a rite of passage that takes place over days. It is a time for families and friends to celebrate the love between the bride and groom and witness their commitment to each other. In this post, you’ll learn some of the main details about Jewish wedding ceremonies so you can understand what goes on during these beautiful events.

A Quick Overview Of A Jewish Wedding

Before going into too much detail regarding the ceremony, getting a high-level overview of the event is worthwhile. While the different sects will have some variants, this pot will provide a general overview of the day’s main events. For example, getting married in Judaism generally involves the following:

The rest of the rituals, such as the white gown, veil, and moveable chuppah (wedding canopy), have developed with Jewish weddings over time. However, the importance of customs is not diminished, as they add a great deal of beauty and significance to traditions and businesses that have come along over time.

Order Of Service Of A Jewish Wedding

Although that brief overview makes the ceremony sound straightforward, there are several steps involved in the process that must be followed to be a success.

Signing Of The Ketubah

The Ketubah is the traditional Jewish marriage contract. It is a document that outlines the obligations of the husband and wife to each other and their respective rights. The signing of the Ketubah occurs at a wedding ceremony, in which both bride and groom sign it with their own hands. The ketubah is signed in front of two witnesses (who are not the bride or groom) and at least one more person who serves as a scribe for the occasion. There are many different versions of this document, but they all share some standard features:

These documents are often beautifully designed in keeping with the momentum of the occasion and typically displayed within the marital household as a loving memory.

The badeken usually happens directly after the signing of the ketubah. As part of this short yet profound tradition, the husband covers the face of the bride with the veil. It is said that this biblical tradition dates back to when Jacob got married for the first time. According to the Torah, he was tricked into marrying Leah rather than Rachel’s true love because Leah’s face was obscured behind a heavy veil. Therefore, to this day, the groom sees his bride’s face and then covers it with the blanket. It is common for the badeken to be emotional since the bride and groom may not have seen each other in the previous 24 hours or more (up to 7 days).

The Chuppah is the canopy covering the bride and groom during a Jewish wedding ceremony. The word Chuppah comes from the Hebrew word for “canopy.” It is typically a cloth or sheet that has been draped over four poles in the shape of a rectangle and is usually held up by two people. The meaning behind the Chuppah is that it is traditionally used as the wedding ceremony’s focal point and symbolizes the home that the couple will create. A chuppah represents the house that the bride and groom will build in their future, which will offer shelter and seclusion. A home is an integral part of Jewish culture since it is where you grow up, where you learn to share and love, and where you gain your independence from your parents to begin your own family. The bride and groom are in the center, surrounded by the couple’s closest friends and family members.

With the more traditional weddings, the bride and groom are usually escorted by their respective parents to the chuppah. According to tradition, the bride will circle the groom seven times. This represents building a wall of love around the couple’s relationship. Among all the sacred numbers in Judaism, seven represents wholeness and completeness that they cannot attain individually.

The Blessings Of Betrothal Known As Kiddushin

Kiddushin is the ceremony under a chuppah, and in this part of the wedding ceremony, two glasses of wine are used. The first cup is served in conjunction with the rabbi’s betrothal blessings, and both the bride and groom drink from it following the blessings. The betrothal blessings express the groom and bride’s commitment to building a Jewish home that serves God and humankind.

Swapping Of The Rings

The wedding ring symbolizes the eternal bond between husband and wife. It is a reminder of the love and commitment they share. It is also an indication that the woman is married to the man because, in Jewish marriages, you are only officially married once you wear the ring. Therefore, the ring has been used in Jewish weddings for centuries as a sign of marriage. In ancient times, it was customary to give the bride one gold coin as part of her dowry, which she then wore on her left-hand ring finger as a sign that she was now married.

It is also crucial that the ring remains plain without embellishment from stone, gems, or decoration. This simplicity represents a simple marriage where love is the central idea over other, more superficial ones.

The Ketubah Is Read

The ketubah is the official marriage contract read aloud in its original Aramaic language and delivered to the bride for her signature and kept by her throughout their marriage. In the eyes of Jewish law, it is a legally binding contract (in the eyes of Jewish law) that belongs to the bride. Depending on the officiating rabbi, the ketubah can be signed before or during the chuppah ceremony. If it is signed before the chuppah, the ketubah should be displayed under the chuppah for the community to see if it was signed before the chuppah. Again, however, this is at the discretion of the Rabbi officiating proceedings.

The couple wishes to honour rabbis, chazans, or others who will recite the Sheva Brachot over the second cup of wine. By incorporating these ancient blessings into a broader religious and social context, the bride and groom become cherished community members. These seven blessings mainly involve praising God as the creator and giving thanks for creating humanity in his image. These blessings are meant to show reverence in the light of the creator. While it might seem as though these blessings would be a solemn affair, they can be pretty lively. In some cases, they can be provided to the bride and groom as they run from table to table accompanied by music and wine, making the entire process very enjoyable for everyone involved.

This is arguably the most prominent part of a Jewish wedding ceremony and involves the groom smashing a glass with his foot! This is the official time for everyone to cheer, dance, shout “Mazal Tov,” and start celebrating the happy couple! Unfortunately, the true origin and meaning are somewhat lost to time, and you will get a different explanation depending on who you ask. Some of the most common include:

However, these meanings are intended to symbolize the beauty of the couple’s union and their desire to be together, linked in love forever.

The word Yichud comes from the Hebrew word meaning “together.” It is when the bride and groom are alone for a few moments, usually to say their private vows to each other. Yichud is the seclusion of a couple for a short period of time. It is the last part of many parts of a Jewish wedding ceremony. The couple enters into this seclusion together and spends some time alone as they are considered married at that point in time. The Yichud can be seen as a symbolic representation of intimacy and closeness between two people, which is what marriage is all about. Depending on the sect and beliefs of the couple, it can also be when the wedding is officially consummated.

A traditional Jewish wedding ceremony is a beautiful and meaningful affair that can lead to a lifetime of happiness, friendship, and harmony when performed correctly and with the correct intentions. It is the joining of two souls, the blending of two families, and the union of two hearts, and it carries with it the promise of a new and exciting future.

What occurs at a Jewish wedding?

A Jewish wedding ceremony includes the following elements: signing the ketubah, or marriage contract if it has not previously been done prior to the ceremony. Under the chuppah, the pair stands, blessings are offered, and the husband places the wedding ring on the bride’s finger.

When it comes to Jewish weddings, what do they say?

One of the most well-known Jewish wedding ceremonies is shouting “Mazel tov!”

Is it customary for Jews to exchange vows during their wedding?

A traditional Jewish wedding ceremony often does not include a verbal exchange of wedding vows; instead, the covenant is thought to be implicit in the rite.