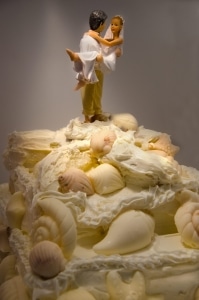 One of the classic wedding groom cake moments in the movies was the armadillo groom’s cake in Steel Magnolias. Grooms often get cakes made that are in the shape of animals. One groom who likes fishing got a cake made to look like a freshly caught fish. Another fishing groom got his cake made in the shape of an open tackle box. The cake can be modeled after the groom’s pet.

Fictional movie and comic book characters can be the stars of groom’s cakes. The cake may be the groom’s favorite superhero or Star Wars character. Many bakers can get wildly creative and make the cake in the actual shape of the character with accurate coloring.

Sports are a common theme for grooms’ cakes. The cake might show the groom’s favorite team’s mascot or brand. One groom included his favorite team and beer with a cooler shaped cake showing his team’s logo on the side of the cooler cake. A baseball fan had cupcakes with the tops decorated like baseballs for his groom’s cake.

The cake can depict a surrealist scene rather than something realistic. One groom had a cake made to show a fox and a bear riding a surfboard. The cake may be something wildly symbolic to the groom but look like a scene from a surreal dream to anyone else.

Though I can’t imagine what anyone loves more than cake, some grooms get a cake to look like their favorite food. Sushi, Nilla Wafers, fried chicken, Cheezits, and a bottle of Tabasco sauce have been used as models for grooms’ cakes.

A groom’s cake might reflect his career. The cake might feature his activities at work or symbols that represent his job such as an apple and ruler on top of a stack of books for a teacher. A cake shaped like a camera was the perfect cake for a photographer. A paramedic might want a cake shaped and decorated like an ambulance.

As a common love among men, trucks and jeeps often are the inspiration for cakes for grooms. The platform of the cake is often decorated to look like a muddy mess of brown smeared icing with a cake shaped like a truck on top of it.

For more information about wedding cakes and planning the reception, please browse the Best for Bride blog.